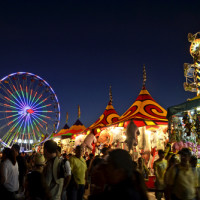 Sabrina Gordon, a 31-year old resident of Hesperia, has died following an accident at the San Bernardino County Fair. Gordon visited the “FreeDrop USA” attraction, which offers a jump from a 40-foot high platform onto a giant inflatable landing pad, similar to what a stunt actor might use on a film set. Gordon was a Navy veteran at the fair volunteering at a CrossFit booth, when she decided to visit the attraction. The investigation into what led to Gordon’s injury and subsequent death is ongoing, but one bystander reported that, while standing on the platform, Gordon started to jump, hesitated, and then fell. Gordon was airlifted to a nearby hospital, but died of her injuries the following morning.

The company that owns and operates FreeDrop USA claims that the attraction is safe. Owner Aspen Decker stated, “We have had over 50,000 successful jumps across multiple states during a recent 36-city tour. We are proud of our safety record and conduct thorough safety training with each of our employees as well as every participant.” A representative for the fair has emphasized the importance of safety to the venue, and has reported that the FreeDrop USA attraction has been closed pending an investigation.

According to those operating the attraction, Gordon signed a release of liability before being allowed to use the FreeDrop USA. A release of liability is an agreement between the person who wants to participate in an event that may involve physical harm, and the company offering the event, which states that the participant won’t be allowed to sue the company should she be injured or killed as a result of her participation. It’s also used as evidence that a participant understood the risk she was undertaking by participating in the event, and that she accepted that risk when agreeing to participate. These releases are generally upheld in California. However, there are a number of reasons why courts might not uphold such a release. These include:

When the content or format of the release is illegal

If a release of liability is difficult to read due to being in very tiny print, or if the most important releasing language was, for example, in a smaller print on the back of the document, then a court may find that the participant could not have read it and understood the contract when she signed it. If the release wasn’t clear on which companies or entities were being released from liability, or was too broad or narrow in releasing parties from liability, the court may find that it was too inexact to be a legal contract.

If the advertising for a particular dangerous event or an inaccurate description of the risks entailed in participating were what convinced a person to participate, the court may find that the participant did not fully understand what risks were involved, and thus was not sufficiently well-informed for the release to be binding.

The company was grossly negligent or reckless

Finally, if the company providing the dangerous experience in some way breached their duties to the participant or acted in a way that led to the participant’s injuries, the court may find that the release is invalid, as releases of liability generally do not release companies from grossly negligent or reckless behavior. In Ms. Gordon’s case, if the operators of the FreeDrop were supposed to first instruct Ms. Gordon on how to safely fall, or give her protective headgear to wear for the jump, but failed to do so, the court may find that the company’s negligent behavior invalidated the release of liability.

The death or serious injury of a loved one can be devastating, and the costs of medical bills or funeral expenses can add to the already heavy burden. If you or a loved one has been injured in an accident, contact experienced legal help that can ensure you receive any compensation you may be owed. For a free consultation on your potential personal injury lawsuit in Los Angeles, contact George M. Rosenberg at 310-207-0703.